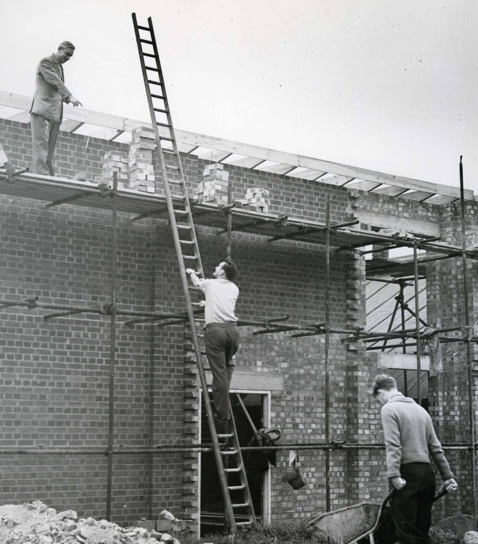 Back to our history
<

“Who is this man named Whitworth? ...He is one of the most important people in Theatre

In 1918, Geoffrey Whitworth visited Crayford as a part-time lecturer for the Workers’ Educational Association. He attended a play-reading by Vickers munitions workers and later wrote: “These players in Crayford were not ‘acting’ in the proper sense at all. They were not dressed for their parts. They had not even memorized their words. With books in their hands, and with a minimum of action, they did not much more than speak the words of the plays, pointing them with a few gestures. And yet, through their sincerity and reality of the interpratative intention, the characters came to life upon the stage and, as I sat and watched and listened, I felt that I was understanding the fundamental quality of dramatic art in a way I had never understood it before. I had been privileged to witness there for the first time an example of the art of the theatre reduced to its simplest terms, yet in this very reduction triumphant.”

He was so moved by this experience that he immediately set about forming the British Drama League which, for the next few decades, promoted amateur and professional theatre and the idea of founding a national theatre. The establishment of a national theatre had first been proposed in 1848, winning the support of the likes of Charles Dickens, Matthew Arnold and Sir Henry Irving. In the twentieth century the idea collected such illustrious supporters as Harley Granville Barker, Winston Churchill, George Bernard Shaw and Beerbohm Tree and, in 1931, Geoffrey Whitworth became the Secretary of the campaigning National Theatre Committee.

When he came down from Oxford, Whitworth had entered a firm of publishers and devoted a great deal of his spare time to lecturing on literature and drama. It was this activity which took him to Crayford. Among his many campaigns for the popularising of the arts was a drive to give local government the right and duty to spend rate income subsidising arts organisations.

Public subsidy, at national and local level, remains inadequate, but the establishment of the principle of support from taxation was largely the work of Geoffrey Whitworth.

At its first annual conference the British Drama League made its chief aims the proper recognition of drama in education and the foundation of a national theatre in London. In the years immediately before the Second World War, Whitworth’s National Theatre Committee commissioned architects to design a building for a site which had been acquired opposite the Victoria and Albert Museum. Subsequently, negotiations with the London County Council led to the exchange of the Kensington site for one on the South Bank. The end of the war brought no change in government parsimony and the symbolic laying of a foundation stone for the National Theatre did not take place until 1951, carried out by the present Queen Mother. Whitworth, by then a sick man, attended the ceremony. He died two months later and never saw his dream begin to be realised when work on the present building began in 1969, following more years of government wrangling over money.

In 1983, on the centenary of Whitworth’s birth, there was a commemorative tribute to him on BBC Radio 4, during which George Bernard Shaw was quoted: “Who is this man named Whitworth? What is he? He is not a great actor. So far as I know he has never acted in a play. If he has written any plays, I have not seen them. And yet, wherever I go I hear the name: Geoffrey Whitworth. He is one of the most important people in the theatre today.”

Whitworth was for many years the Director of the British Drama League and was responsible for its collection of possibly the biggest theatre library in the world, much of which is now held by the Theatre Museum in London’s Covent Garden.

“Who is this man named Whitworth? What is he? He is not a great actor. So far as I know he has never acted in a play. If he has written any plays, I have not seen them. And yet, wherever I go I hear the name: Geoffrey Whitworth. He is one of the most important people in the theatre today.”

We use cookies to ensure that we give you the best experience on our website. If you continue to use this site we will assume that you are happy with it.Ok